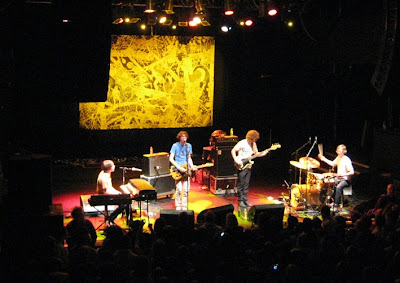 ... which is The Whitest Boy Alive who we went to see play live at Koko and they were just as brilliant as I expected them to be! I can't wait for the new album to be released. The Champions League final between Chelsea and Manchester United was on at the same time and standing by the mixing desk I spotted a small TV that the crew were watching and as a result they weren't paying much attention to the gig. You couldn't really see them on stage most of the time and I felt a bit sorry for them but at the same time they played so tight as a band that lights would have made no difference. It was one of my favourite gigs ever.
I had a little visitor yesterday.
Posted by famapa at Thursday, May 22, 2008